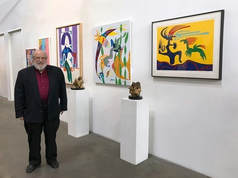 Barry Gordon is an artist who specializes in painting and sculpture. His paintings are characterized by vibrant colors, whimsical representations of humans, florals, animals, and other inhabitants of the natural world. His sculpture is surrealist. Speaking of his paintings, Gordon says, "I try to achieve a kind of visual counterpoint between color, composition, abstraction, representation, and fantasy." The tone of his work is often humorous, with frequent flights of social satire and political commentary. One can visually delight in the art and intellectually contemplate the content. Gordon has been called both "a sociological surrealist" and an "abstract surrealist."

A Brief Biography.
Barry Gordon grew up in Los Angeles and, like many artists, enjoyed painting and drawing at an early age. He started taking art classes at age 7. At age 9, one of his artworks was included in an exhibition of children's art at the Museum of Modern Art in New York.
Gordon continued painting, drawing, and sketching as he went through school. In 1965 he graduated from the University of California, where he majored in Sociology. Later that  year, he had a one-man show at the Bogner Gallery on Gallery Row in Los Angeles. It was his debut exhibition. The day after it opened, he left for training in the Peace Corps.
Gordon spent three years with the Peace Corps in Thailand, then returned to the US, where he earned a Masters degree in Social Work, with a focus on International Development. Following this, he did additional graduate work and also taught courses in Organizational Development, Community Organization, and Social Research and Social Policy. Gordon's next move was to work for the government in the Office of Refugee Resettlement where, as he said, social policy was applied, not just theoretical. Throughout this period, Gordon continued his artwork. In 1982 he was invited to be in a show called "New Artists at Madison Square Garden." From this point forward, he became a full time professional artist. In 1984, he had a solo show at the Stuart Gallery in New York City. In 1983, ’84, and ’85 he did a number of illustrations for The New York Times, Washington Post, and other publications. In 1994 he had a 92-piece 30-year retrospective.
The following is a review of Gordon's paintings at an exhibition in 1995. It was written by art critic Shirle Gottlieb for Art Scene magazine and is perhaps the best way to introduce you to Barry Gordon’s work.
Cool and Mellow                                                California Jazz, Warm & Hot, Cool & Blue
"The thing for an adult is to regain the seriousness of a child at play." That famous quotation by 19th century German philosopher Friedrich Wilhelm Nietzsche is at the heart of Barry Gordon's art.
For the past nine years, this self-described 'abstract surrealist' has expressed his innermost concerns in terms of audacious and colorful, satiric and comical, wildly imaginative, playful imagery. Evolving a mixed bag of Paul Klee, Joan Miro, Pablo Picasso, Saul Steinberg, and Salvador Dali (all of whom he admires), Gordon's wildly colored canvases and commedia dell'arte caricatures all but jump off the wall to capture your attention.
Aside from his energetic, vibrant composition (flat free-flowing forms of highly charged color, multiple textures, and rhythmic crescendos of staccato line and pattern), Gordon incorporates more than a modicum of intellect in his narratives. Viewers can dash through this exhibit and be entertained by the clever surface appeal of the work (oil on canvas paintings, drawings, prints and etchings). Or you can take your time, concentrate, and cull forth multiple-layered social commentary.
We laugh immediately at the 'hip cat' characters depicted [above] in Cool and Mellow and California Jazz: Warm and Hot, Cool and Blue; we smile in instant recognition at the flamboyant appearance of California
California People                                                  Optical Abstractions, Political Allusions
​People (some of ​our kids could have posed for these paintings); but Optical Abstractions, Political Allusions (which also works vice versa as Optical Allusions, Political Abstractions) presents a challenge to both perception and preconception. 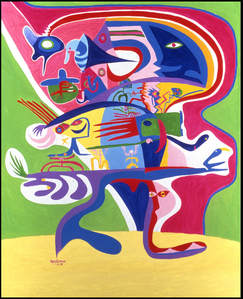 Another engaging work that operates successfully both visually and conceptually is Societal View: Stable Table and Other Life Patterns. Beautifully designed [it presents] an intricate pattern of kicky abstracted objects….

Equally delightful is the satirical Melodramatic Landscape: The Act of Knowing…

The operative word is always 'connections.' Gordon is a firm believer in universal linkage. Just as "the head bone ultimately is connected to the foot bone," people are inevitably connected to their culture, their country, the world, and to each other. A former Peace Corps volunteer, university professor, sociologist, government research scientist, lecturer and social-strategist, Gordon's concepts 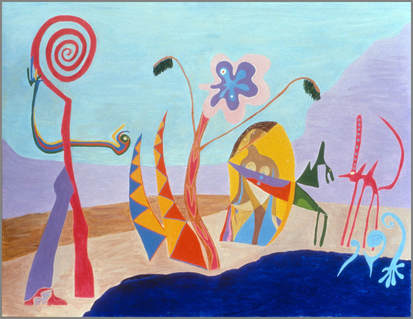