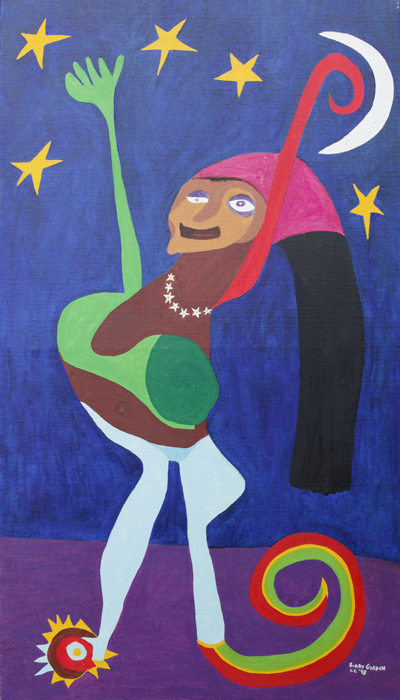 Beginning in 1952 one of my artworks was chosen to be in an exhibit of children's art at the Museum of Modern Art in New York (MOMA-NYC). My next show was at a progressive children's nursery in Los Feliz, California.  A number of my works were stolen and never recovered. By the time the 1960's rolled around, I had my professional debut at the Bogner Gallery on gallery-row on La Cienega (Beverly Hills, CA) on the same day I was to report for Peace Corps training for Thailand, October 11, 1965.

Throughout the 1960's and 1970's I continued to create and show my work in various cities in California including Los Angeles, Pasadena, Burbank, San Diego and in such other places as Washington, DC., New York City, Phoenix, Seattle and Miami. I have had shows internationally, in what was formerly Yugoslavia (Belgrade), Russia (Moscow), Armenia (Yerevan), Brazil (Rio De Janeiro, Sao Paulo, Belo Horizonte) and had illustrations published in various newspapers and magazines, including the Washington Post and the New York Times, as well a an album cover for CBS Records for the 1984 Olympics' Giorgio Moroder Theme song for Track.  I was also selected to attend an illustration program at Syracuse University during the early 1980's.

In 1985 my family and I moved back to California and started the Gordon Gallery in Santa Monica (1985) which lasted through 1996 and was the last gallery on Montana Avenue among seven galleries, surviving a multi-year recession.

In 1994, I had a 90+-piece retrospective exhibit at Cal Poly (Pomona).
In 1996-7 I founded and directed the 501c3 non-profit organization called the Foundation of Creative Arts. We sponsored several shows, grew to have about 125 members and then ceased operation.

From the 1990's to the present, I have been producing paintings, drawings and sculpture. For more details see the CV below.